Lörrach played an important role in the Baden revolutions of 1848 and 1849: here, in the border triangle of Germany, France and Switzerland, the guerrillas of the Baden revolution faced the confederate troops. Whether attacking or retreating, all the revolutionary trains crossed the region.

In addition, Gustav Struve proclaimed the first republic of Germany here – on 21 Septem­ber 1848, at the old town hall in Lörrach. Lörrach was even the seat of government for three days.

The Bike.Routes.Revolution routes lead you from Lörrach into the Wiese valley, the Kander valley and the Rhine valley. You can explore the revolutionary sites along the way by e-bike, touring bike or mountain bike. 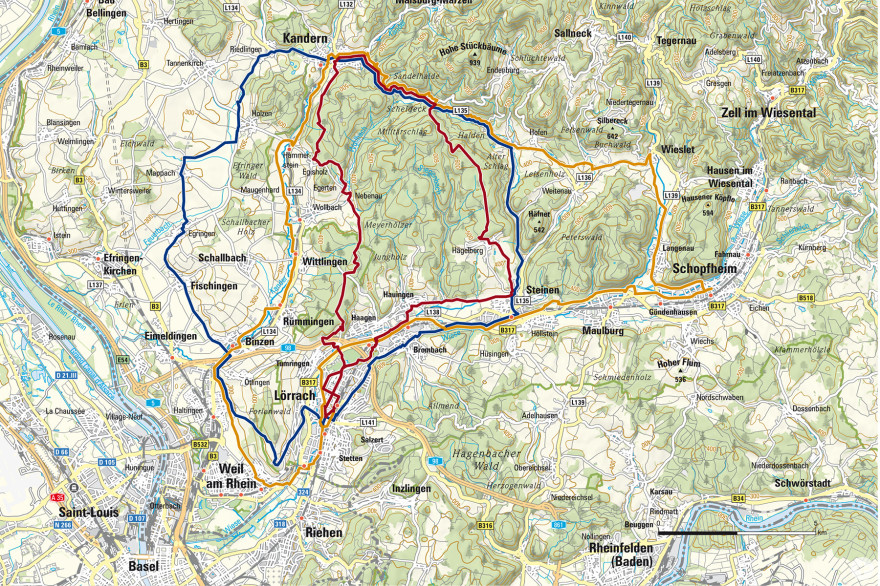 Bike.Routes.Revolution is presented by the town of Lörrach in cooperation with the State Agency for Political Education of Baden-Württemberg and the network of towns on the Democracy Way.

Lörrach: the first German Republic in 1848

On 21 September 1848, Gustav Struve marched into Lörrach from Basel with a troop of guerrillas. There, in Lörrach town hall, he proclaimed the German Republic. And declared Lörrach the provisional seat of government.

Lörrach was no accidental location: the border location of the city was ideal for the development of democracy in the region. The nearby foreign countries offered safe haven to the revolutionaries and were at the same time a breeding ground for liberal ideas.

Be sure to pay a visit to the Dreiländermuseum in the centre of Lörrach: it has the largest col­lection of objects relating to the 1848/49 revolution in the southwest of Germany. In the permanent Dreiland exhibition you can admire selected originals.

Lörrach celebrates the Day of Democracy